Chalk this up to some sort of compulsion to fix things instead of throwing them away. The scenario: I found myself owning a 3rd generation Kindle with a broken screen. At the time that the screen broke, replacement screens were about as expensive as just buying a new device. By the time you paid for shipping halfway around the world, getting a new one was a winner.

Fast forward about three years: I’m rooting around in a bunch of junk for some obscure reason and I come upon said Kindle, broken screen and all. A little Google-Fu and I find a replacement screen for $20. I don’t really know anything about the screen, but I go ahead and order it. While I’m waiting for it to arrive, I tear apart the old one. Rather than repeating the whole story, I’ll just provide a link to the teardown guide at iFixit. Behold, a pile of parts: 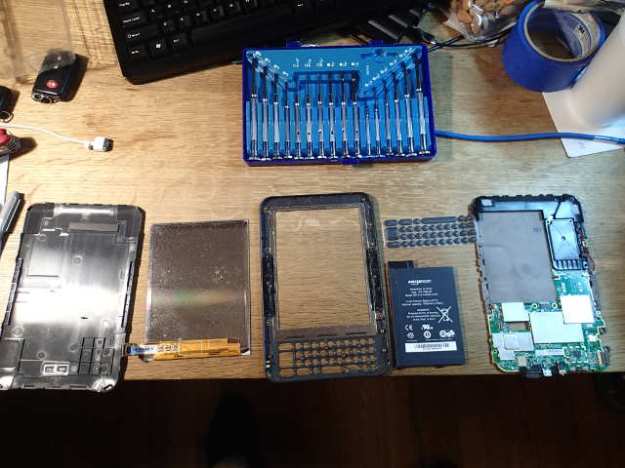 Now to be certain, the new screen wasn’t truly new. It arrived with a page of text displayed on it (e-Paper will hold an image indefinitely even disconnected – that’s how it manages to use so little power). My guess is that it was pulled from a dead Kindle returned under warranty and shipped halfway around the world for repair. Maybe it made sense to repair them at the time. That would have been around 2012-2014. I can’t remember when it was that it got sat on.

Assembly is the reverse of the above steps:

(That has a ton of lens distortion. Still, the little Olympus TG-2 is usually better than the iPhone 6S, except maybe in this case)

After a few minutes to charge back to a safe level, and a few more minutes as the device reboots from a totally cold start, up comes the Kindle UI and it’s ready to go. All the previous Young Adult fiction was safely in place, along with a good bit of Project Gutenberg texts (yay!). I have to figure out how to get the cheesy vampire novels off of there.

Well, deleting them assumes I’m going to use the thing. After the effort to fix it, and the $20 screen, I’m stuck with it. The problem I have with it is simple: it’s complete crap for reading PDFs. Every issue of Byte Magazine, for instance, is available as a PDF. The archive also has links for the ePub format, which is almost the native format for the device, but the files genuinely suck. The problem is how they’re made. When the magazines were scanned, the images were fed through optical character recognition. The OCR can’t tell the difference between article text and an advertisement, it often gets punctuation wrong, and it sometimes goes on on a tangent and doesn’t become human-readable again for a dozen pages. When they went to make the ePub files, they took the OCRed text and converted to ePub.

So I’m reminiscing with old issues of Byte in PDF, and the Kindle doesn’t cut it. Now what I can do is find interesting books to read. Project Gutenberg texts, for instance, are lovingly edited by hand. There are some textbooks, particularly for Computer Science topics, that are free. In theory, the Kindle can be used as some sort of obscenely oversize iPod. I think I’ll just keep the fourth generation iPod on hand, thank you.

So, the point of this exercise? Didn’t really have one. Maybe I’ll finish reading the introduction to Erlang that I have on there. But it works, darn it, and I only sank $20 into fixing it.